HomeWheels for WellbeingMourning the passing of Richard Bennett aka...
28 days ago

I attended the funeral of Richard Bennett yesterday, 28th April 2022. Richard (better known as Heavy Metal Handcyclist and @crippledcyclist on Twitter) passed away on 22nd March, aged just 32. Like countless others, I’d been shocked to learn this dreadful news from a tweet by fellow Disability campaigner Doug Paulley:

Disability and Cycling campaigners alike have been mourning Richard’s passing ever since and it was an honour to be asked by his family and partners to say a few words about his impact on the cycling community at his funeral yesterday. I learnt much about other aspects of his very full life.

In the Twittersphere, Richard was hugely respected for his online activism: clear, uncompromising but fair Tweets, backed up by facts and accompanied by a good dose of wit.

A Heavy Metal loving IT professional, he openly talked about living with Ehlers Danlos Syndrome (EDS), a rare genetic condition causing unstable and painful joints, high levels of fatigue and pain, amongst other symptoms and Attention Deficit & Hyperactivity Disorder (ADHD). He described himself as an ambulatory wheelchair user (meaning he used a wheelchair, as well as other mobility aids to access the world around him whilst walking remained an option, albeit a limited and painful one).

But he wasn’t always an all-out proud Disabled rights activist. Like many of us he’d first had to overcome his own internalised ableism: for example, he’d only reluctantly agreed to try using a wheelchair to access Hellfest, in 2014. The wheelchair made it possible for him to enjoy the Heavy Metal festival without the dulling effect of huge doses of pain killers. He never looked back. He acquired his first clip-on handcycle in 2016 via the Access To Work scheme and used it to cycle commute to Euston for his job at UCL’s Wellcome Centre (initially from Romford, then across Central London from Waterloo Station after moving to Woking).

Subsequently, fighting against the scourge of barriers which make cycle routes impassable for Disabled cyclists became his crusade and brought him notoriety on Twitter. Such barriers are routinely installed on traffic-free walking/wheeling and cycling paths, often to exclude a minority of anti-social moped or dirt-bike riders. Having won the removal of several barriers himself, he turned to helping others do the same. In 2019 he joined Wheels for Wellbeing and others on The Beyond the Bicycle Coalition. He adapted Doug Paulley’s step by step guide to using the Equality Act 2010 to challenge discrimination (DART) into a template, tailored to challenging barriers. The #BashTheBarriers campaign was born.

Richard improved the lives of countless people. He did this directly, in conversations at the Download Festival, at work, online… passing on clear and practical tips about how to obtain the right mobility aid, or the right medical diagnosis, or even how you stop a train from setting off with you still on board when Passenger Assistance haven’t turned up with a ramp (something far too often experienced by wheelchair users!). But also, indirectly, by raising the profile of accessibility for Disabled cyclists & guiding engineers to become better designers.

Here is what Mark Philpott (aka @RantyHighwayman and who’s day job is as an engineer) said:

“As is often the case in modern life, I first met Richard through social media and quickly saw that the barriers which prevented him getting around by cycle were common to my own as a tricyclist [Mark often rides a cargo-trike]. I was pleased that he agreed to join the Beyond the Bicycle Coalition as he brought specialist experience of using the law to get actual barriers removed. His knowledge and willingness to guide others has helped countless people to challenge their own local authorities with a great deal of success. Richard has also helped me and many other engineers become better designers through our discussions; and more widely, he has genuinely raised the profile of accessibility for Disabled cyclists which in turn helps everyone – the very idea of inclusive design. He was far too modest to take credit for all the good he did and that good shall be his legacy.”

Richard is survived by his dad David, siblings Phillipa and Hayden, and his partners Eryn and Abi, as well as a wonderful band of relatives and friends, some of whom I had the privilege to meet yesterday in real life. Many more on social media across the UK and internationally. Rest In Peace Richard. Your legacy will live on!! 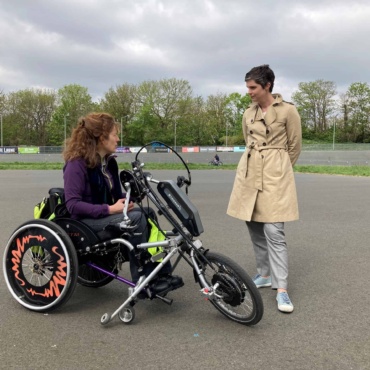