I used to cycle a lot as a child. I loved it! It was all part of socialising and growing up. It was absolutely essential for me to be able to get around independently. It also enabled me to stay out for longer periods to explore, and cover distances that would have been impossible without my family transporting me around.

When I moved to London I stopped cycling. And as my tics began to intensify, cycling was something that felt increasingly off limits. The combination of not always being able control body movements, to balance, or even move the bike along added to my difficulty. However, it wasn’t something I dwelt on.

But as my mobility deteriorated further and I started using a chair, I became increasingly obsessed with wheelchairs and ways to move around in a more satisfying way – I wanted to be more active. And I wanted to be able to do things that were physically tiring – because I CHOSE the movements, not BECAUSE OF my involuntarily movements. You see, there’s a big difference between how it feels if I’ve purposely exerted myself physically: like swimming or cycling – to if I am just exhausted or sore because I’ve been moving around because of my tics.

I like to be able to challenge my body to do things. Repetitive actions are really useful as my body can get into new patterns, which gives me a bit of respite from other movements.

That’s why I’m grateful to Isabelle from Wheels for Wellbeing, who I’d met at various events, and who encouraged me to try cycling again. It’s made a big difference in terms of the range of activities I feel are open to me. The thing about cycling I really appreciate is the ability to be able to make my legs work in a way that’s safe and stable and there aren’t many activities where I can do that. That’s really important to me. 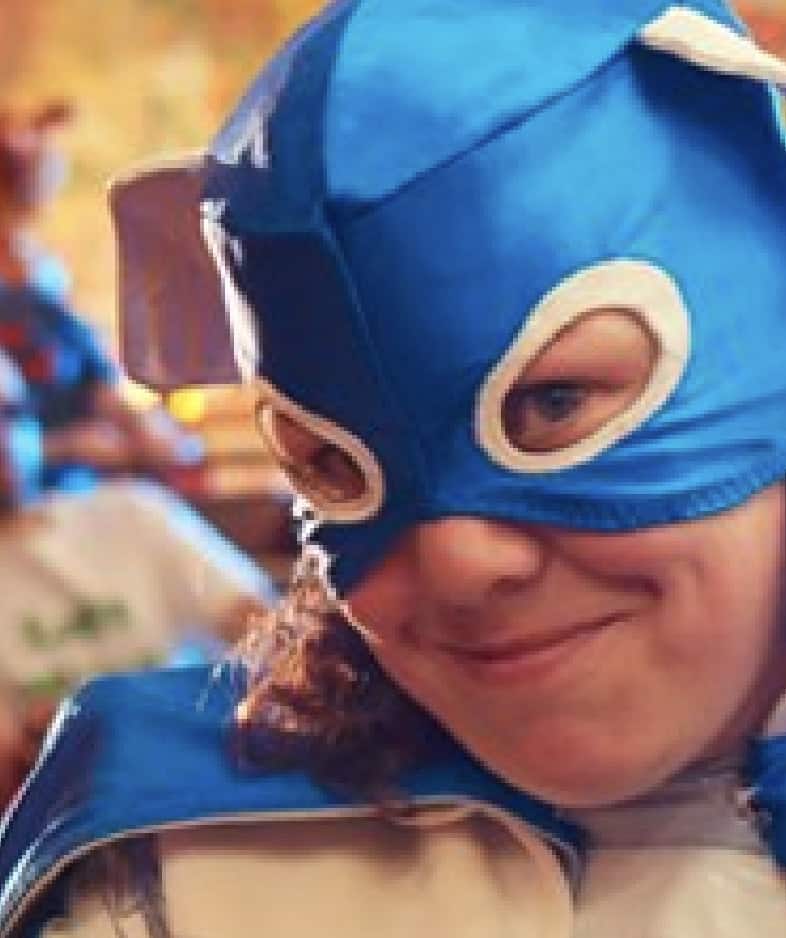 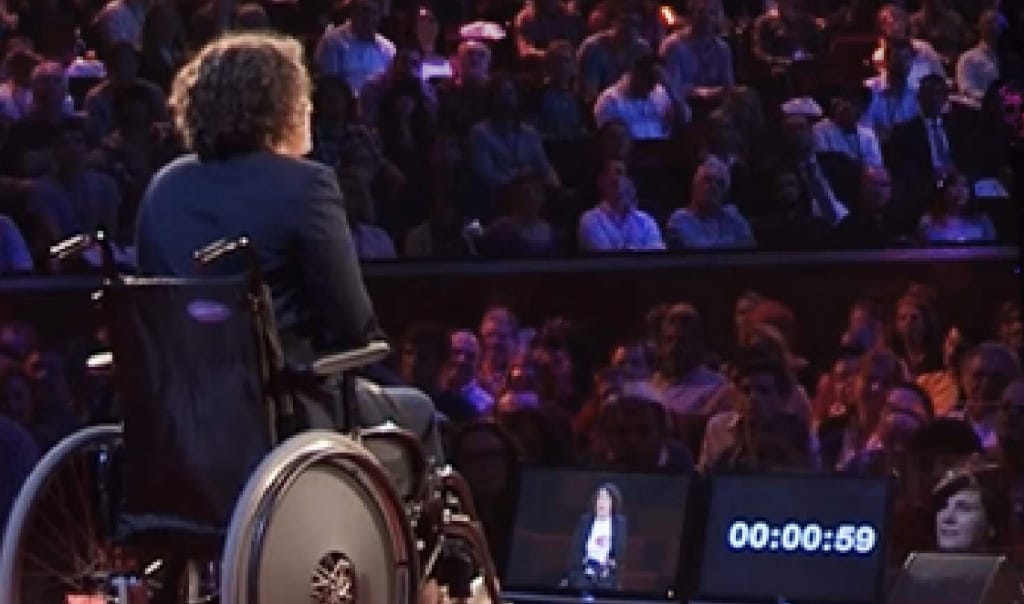 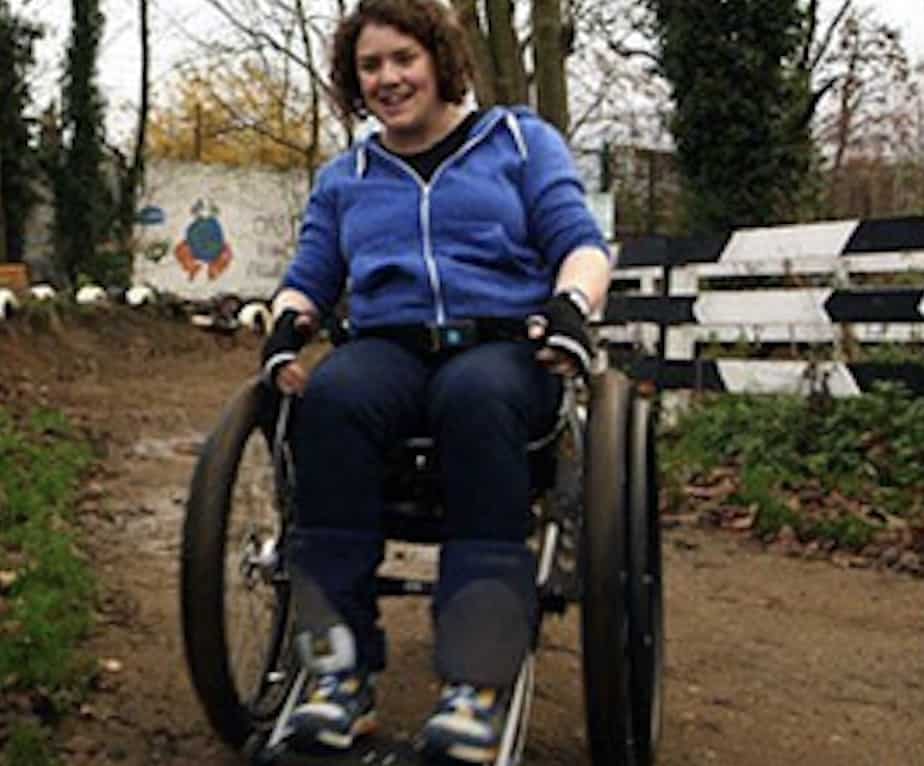 Before cycling with Wheels for Wellbeing I hadn’t explored what disability sports activities were available. I’d just assumed that what was available was only for professionals – and I’m very aware I’m not a Paralympian – despite the fact that some people see my chair and assume that’s what I must be (laughs).

At Wheels for Wellbeing, I ride on a side-by-side with someone beside me. That’s good because it means that if my tics intensify to the point where I can’t control my body, there’s someone there who can take over. It also means that if I move suddenly or lose control, we’re both safe. On a track situation I would like to have a go at riding totally independently. I think if I were to cycle in the city it would be nice to do it with someone else as well.

Making the connection with a disability sporting organisation was instrumental. It’s opened my mind to the possibility that there will be other sports I can get involved with too.

Jessica Thom is the co-founder of Touretteshero. She is a playworker, and expert fundraiser. She currently helps coordinate a large play project in South London. Jess has had tics since she was a child but wasn’t diagnosed with Tourettes until she was in her twenties. With some encouragement from her friends, Jess decided to turn her tics into a source of imaginative creativity and Touretteshero was born. 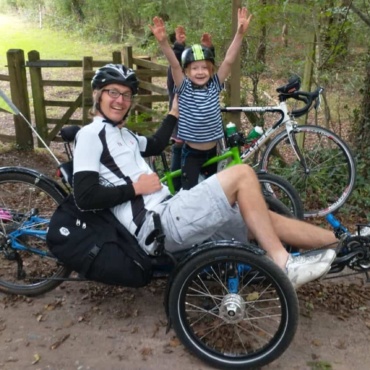 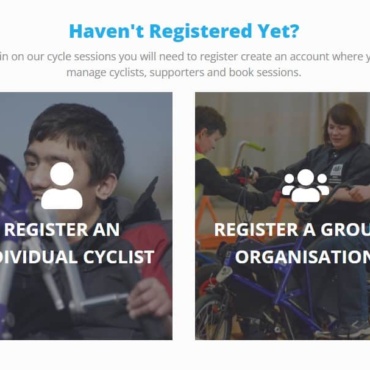 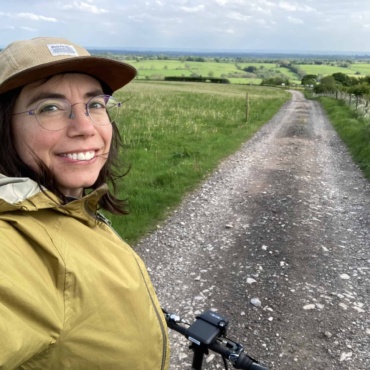